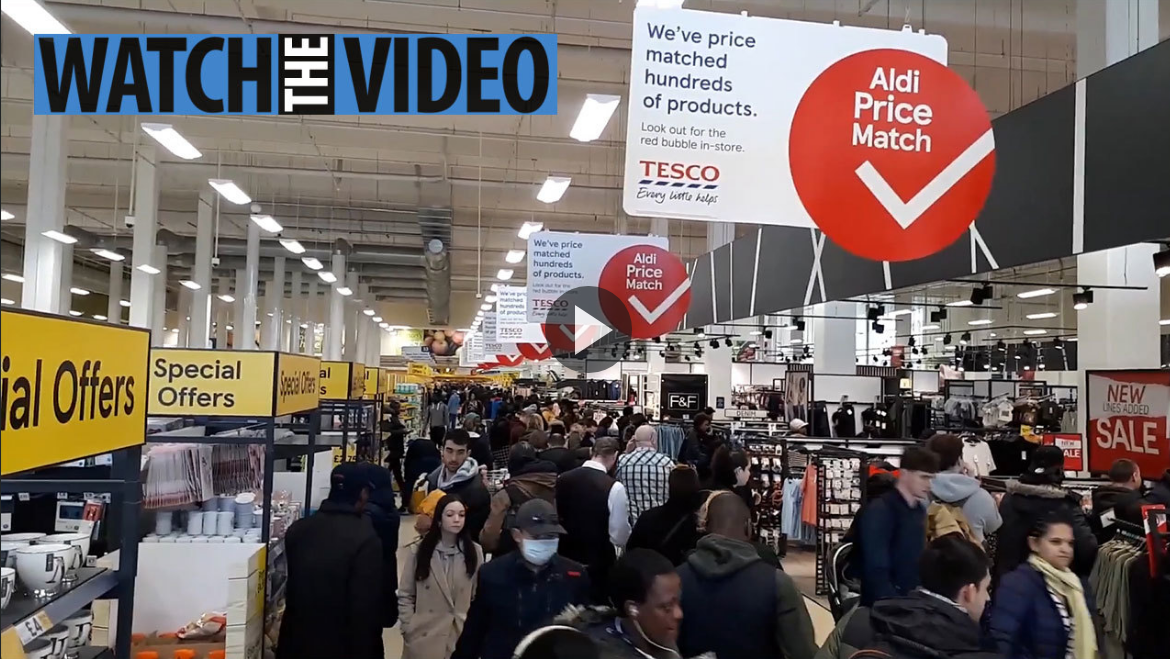 BRITS descended on the supermarkets this Mother’s Day as another day of panic buying ensued.

Panic buyers crammed together, despite being urged to exercise social distancing amid the coronavirus crisis as queues of 1,000 people formed at a Dudley Tesco store.

Shockingly, the queues snaked round the block at a time set aside so NHS staff could shop.

Chaotic pictures show scores of medics, some wearing inform and others with lanyards around their necks desperately searching for essentials after the store was overrun with panic buyers.

Huge queues can be seen, which snake out of the doors and into the car park.

The Midlands store had set aside the hour between 9 and 10 am for hero NHS workers who otherwise might not be able to head to the shops at times when stock is high.

But the huge throng of customers overwhelmed the store, and staff reportedly stopped checking IDs after the first half-an-hour.

One NHS worker called it a „disgrace“.

Many medics left before the doors even opened, fearing theirs’ and others’ health as shoppers crammed into the queue, quite literally one on top of the other.

Official health guidelines recommend a distance of 2 metres between people – as the bug can easily jump from host to host.

Horrified shoppers at the store also said people were „fighting“ and there was a „deep crush“ to bolt through the doors once they opened, The Mirror reports.

Shoppers flocked to social media to complain about the disaster, and reported social-distancing rules were completely ignored and security staff verbally abused.

One Twitter user wrote: „@BorisJohnson so today my wife and I as she is an NHS nurse arrived at Tesco Dudley 08.30 as they are supporting NHS staff to be greeted by 1000 queing joe public, ALL NHS staff walked away as the risk is to great, you need to help NHS staff better sir.“

And a worker added: „Dudley – what a disgrace. Turned up for the NHS early hours shopping to find a scrum at the door.

„I spoke to another lady with an NHS lanyard who said people are fighting, the shelves are empty and you can’t get in anyway.

A Tesco spokesperson said: “The priority hour is a way to support NHS workers get access to the things they need and to say thank you for all they are doing.

„The overall the feedback has been positive, but we know some stores were still very busy during this time.

„We’re going to continue to offer priority shopping times to NHS workers, and we ask all other customers to help us give NHS workers priority by shopping during the usual Sunday opening hours.“

But shockingly, the scenes were mirrored around the country today despite Rural Affairs seretary George Eustice warning Brits not to panic buy in yesterday’s daily downing street briefing.

The MP also said he needs everyone to „play their part“ – as he revealed the plastic bag charge will be removed amid the chaos.

Mr Eustice urged people to think of NHS workers as he outlined measures to bolster the food supply chain.

He said: „We recognise that this is a challenging time and there are many things the Government is asking the nation to do differently as we work together to fight this pandemic.

„Be responsible when you shop and think of others.

„Buying more than you need means others may be left without.“

He said: „It is critical that by not stockpiling, by not selfishly shopping, that our health workers are able to get access to what they need too.“

The chief executive of British retail consortium said there „is plenty of food in the supply chain“.

Helen Dickinson said: „Brits have a billion pounds more food in their homes than they did three weeks ago, so we need to make sure we eat some of it.“

She wanted to reassure worried Brits people that those „right across the food industry… are doing everything they can to ensure that we have the food we all need.“

Ms Dickinson said that the industry was experiencing a demand „like Christmas without the four-month planning that we normally have in advance“.

She added: „We’ve managed to do it in two weeks.“

UK supermarkets are recruiting thousands of extra staff and working round-the-clock to keep up with the unprecedented demand.

And Tesco’s chief exec, Dave Lewis said: „It’s been a tough week for the whole country. No one is untouched. No one is immune to challenges we face as a country.

„Covid-19 is bringing huge changes to the way we live and work.

„Sadly, we are closer to the beginning of all this than the end, but it’s clear that our national spirit is alive and well and nowhere is that more evident than in food retail.

„We’ll play our part but anyone watching the news knows that this last week has been extraordinary for all shops.“

He also urged Brits to consider if they „really needed“ everything in their trolley next time they go out shopping.